Harlow is laying next to me on the couch, paws collected, squeaking through her dreams, fast asleep.

As she dozes happily, I am sitting here thinking about what an insufficient dog mom I am.

On Friday I met with our wonderful vet, Dr Chase. She into the exam room and immediately sat down on the floor, staying there for the half an hour, while we talked about Harlow’s behavior and discussed our options with regard to medication vs. other ways to deal with her (according to the trainer) fear and stress-induced behavior.

Between the collar that releases some kind of happy pheromone, the chewables that she could take on a case-by-case basis (but you’d have to give her two hours before the incident you aren’t expecting to happen), or the medication she could take daily, I basically left the vet’s office paralyzed with indecision. I told her that I will think about it over the weekend.

The weekend is up and I am no closer to a decision.

Harlow doesn’t chew door frames when I’m not home, or pee on the couch in a panic when visitors come over. She doesn’t bark incessantly, or chew her own legs in nervousness. I don’t feel that she needs to be medicated every single day, nor does my vet, but I confess that the idea of Prozac is mildly appealing.

To be honest I don’t remember what the Prozac does short-term, but the vet explained that after about a month it helps the dog be more mentally pliable, and as a result more responsive to training. If we put her on Prozac, in a month or so we could work on desensitizing her to the things that make her nervous, as well as work on improving her decision-making through training.

Today I took her in to the yard and threw ball around for her, then we went to the Fells and went for a hike with Ben. After that we stopped at the dog park and after about 10 minutes a dog about half her size nipped at her (according to the owner. I was watching, nut I didn’t see who “started it”). Harlow chased this dog incessantly, barking at it aggressively. All I could do was yell at her name and try to catch her. And of course she simply ignored me, and there was no catching her, really. She’s like trying to catch a greased pig. The other owner managed to grab her dog first and she apologize profusely, even though it was unwarranted. After all, my dog was the one who kept up the chaos by chasing her dog around for an extended period of time!

During our walk, I caught myself raising my voice at Harlow only once. This is quite an accomplishment! I’m trying hard to keep a level voice in the household too. This is hard because she basically acts like I’m white noise.

I think that Harlow is insecure, and unclear about what I want from her. I’ve been working on the exercises that our trainer gave us weeks ago, which has helped her behave less like the “queen bee” of the household, demanding attention by pawing at me, or head-butting me for the same purpose. While she’s made this improvement, and I’ve made improvements by not raising my voice, she seems a bit confused and at a loss for what to do with herself sometimes. The other day I was making dinner and she was right under foot, something she never does. It seemed blatantly clear that she seem insecure and I simply don’t know why.

I feel like I’m in a physics class, and I am so lost in the material that I don’t even know the right questions to ask. She’s a dog, not a human child, so perhaps I just sound ridiculous. But I would really like to just have a relaxed relationship with her, and know that I can trust her to not be unpredictable.

When we discussed Harlow’s reaction to a stranger, the vet said that not even she likes everyone that she meets. It’s an interesting point – humans often meet people that we don’t particularly care for. Dogs have the same experience, they just don’t know how to be polite and move on. Instead, they make it clear to the other being that they don’t like them.

And our reaction is to get upset at the dog, rather than simply learn that the dog needs more time, and more space. And possibly a cattle prod.

She has just gotten up from her position on the couch, turned to face me, laid back down and positioned her body so that one paw touches my leg. Just a bit. I want my space, but you’re right there, right? 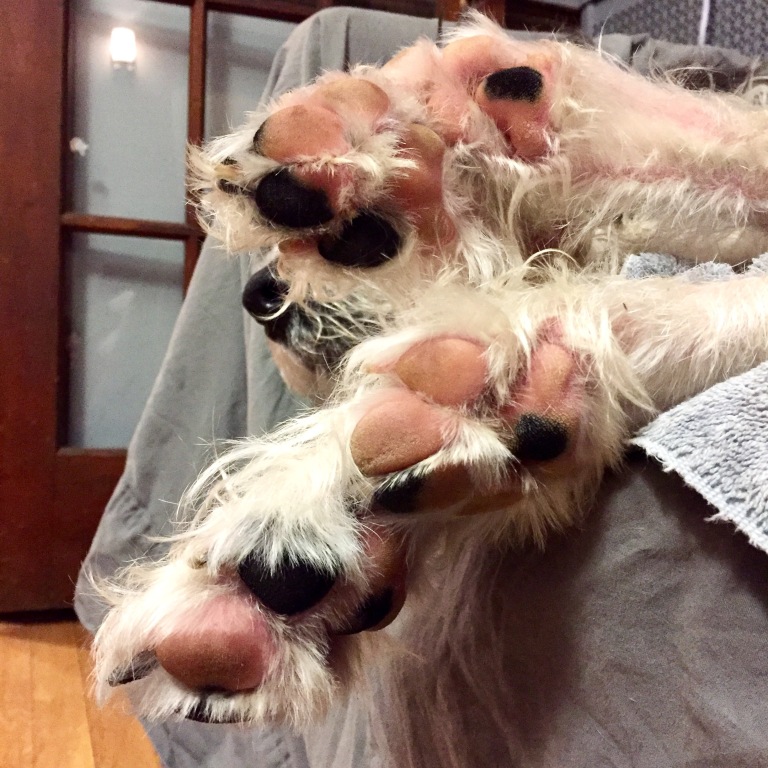 You may have caught this video in my stories so apologies for the redundancy but I can’t help it. It makes me so happy I need to post it so I can see it again whenever I want. I didn’t know when I shot this while waiting at a light, that this guy is a regular to this intersection, sometimes even using a pole to practice pole dancing on. From my commentary you might sense that I was concerned about him. Maybe he’s mentally ill and needs help? As I thought on it while laughing through tears after driving past him I realized that the wearing of pink underwear was far too premeditated for someone who didn’t have a plan. This guy made me so happy. Just doing his thing, getting a workout, and making people smile. I really needed it. 💃🏻 🩲 🕺 🚗 ❤️👏🏻
Her post-bath hair band look would 👏🏻 not 👏🏻 let 👏🏻 up! So I literally had to cut her “bangs”. 😂. Apparently the pre-bath dirt had been keeping it out of her eyes
Cat’s eye view. If there was a cat in the house.
#hanes had a big sale on sweatshirts. I got a maroon one and loved it so much I got a purple zip-up hoodie and this one too. I think this one’s perfect for my side gig as a traffic cop! #comfy
It still counts even if you’ve only known your sibling for a bit under three years, right? Happy Sibling Day to my Little!
Happy National Sibling Day, @chrisjscott !