Almost a year ago, I was dumped. If I claimed I bounced right back my computer screen would get a crack from the whack of my growing nose. In general I don’t really miss him anymore (and by the way, how unfair is it that I actually feel guilty typing that? Feelings are such bullshit), but the putrid emotional aftertaste lingers.

It lingers in that, after this past year’s experience, I do not care that I’m alone. I have never in my adult life felt this way. I have told myself that I felt this way in an effort to convince myself, but it was just an emotional magic trick that never worked (the rabbit always popped it’s head out of the hat). This time, it’s for real. I did meet someone really great a while back when I tried dating again. He was maybe-I-could-give-this-another-shot great, but I found that when I parted ways from him after a date, I was completely overwhelmed by a visceral repelling from the idea of getting close to anyone.

I do not want to be important to someone.

I do not want someone in my life again who is important to me.

It sucks actually, because I really don’t want to feel this way. I do hope it passes, because life is short, but at the same time I’m pretty content right now. There are things I don’t have to stress over; there’s the trivial stuff like what it means that my boyfriend won’t acknowledge my existence on his Facebook page for example, and more serious disappointments that need not be listed. I’m free of that. Why would I want that back?

But lately I’ve been thinking that maybe getting to know someone wouldn’t be so bad.

Now I’ll explain (I know you’ve been holding your breath thinking tell us what’s with the title, Cyd!).  Someone on Facebook posted that they’d had an encounter with an eel, and refered to it as an “aquatic danger noodle”

That sounded familiar to me…danger noodle…why is that familiar? Then suddenly I hear my ex’s bellowing laugh in my head (is it the person’s laugh that we miss? The idea of the laugh? Or just having anyone to laugh with?) and I remember where I’d heard “danger noodle” before. When he was still my boyfriend, we laughed reading an entry similiar to this one over a year ago. After that, we would mention “trash pandas” and “fluffy fat nopes” in everyday conversations, because it was amusing to us. The one he laughed the hardest over was the danger noodle.

Sometimes I think trying that love thing again wouldn’t be so bad, and then an emotional landmine like a stupid danger noodle strikes and I think “Nope…nope, I’m all good, thanks!”

And cause this entry’s a downer, here are some pictures of sweet Harlow to bring it back up… 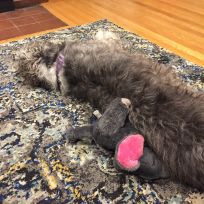 I glanced into the other room and she was resting like this, back legs up the wall 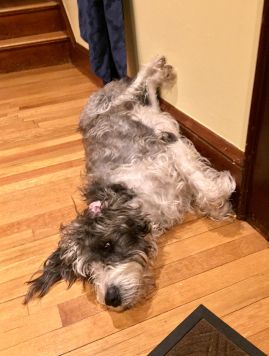 And she stayed that way for at least 15 minutes, like it was perfectly normal.