Every night I come home eternally grateful that I have a home. Not only that I have a home, but it’s the home I ended up with. My lavender house was the third house I put a bid in on and I’m so happy that the first two fell through!

When I started house hunting years ago I knew I didn’t want a lot of yard. I do not have a gardener’s touch and I didn’t want the hassle. When I saw my house though, and its weird yard with various levels and tons of rock, boulders, and retaining walls, I loved it. I still do.

Years of trying to figure out what to do with the spaces though has been frustrating. Last year’s big project was getting the house painted. This year, I’m calling in some professionals with hopes that will have good ideas for my problem areas.

I have a giant Norway maple tree which is pretty, not native, and casts a massive shadow. Over the years I have tried in vain to grow hosta underneath. Yes, hosta. You know, the industrial plant of the gardening world? Planting them is a serious endeavor. I would dig the biggest holes I could manage, which would require pulling up a ton of rock because my property is resting entirely on rock, and also cutting the spindly, shallow roots of the tree. I planted the hosta and they never grew into much. It took me a while to realize the never would because the roots of the tree were so shallow, that they would never let the hosta reach their potential. 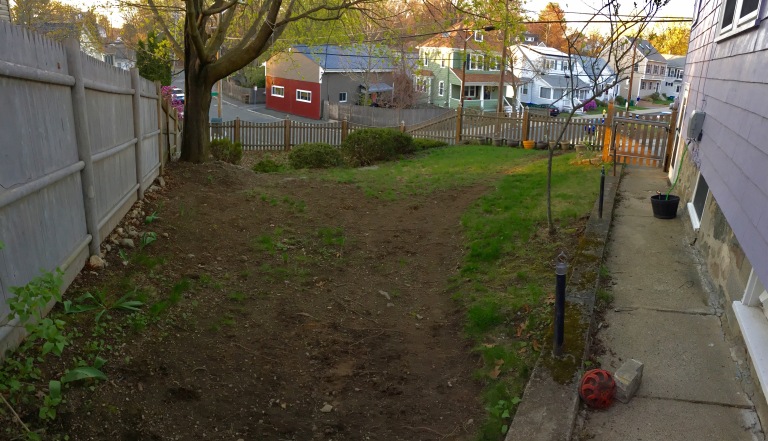 Thanks to the shade and the dog, my yard is an eyesore.

I’m thinking A) have a little deck built where I can use the fire pit, and maybe surround the deck with potted plants and maybe raised beds.

B) Have a series of raised beds put in and surround them, finances permitting, with gravel.

Problems include a fire as a result of the fire pit on a deck, a deck that looks funny because while you can’t see it so well here, this is actually a slight hill. A level deck running along the fence, which is going down a hill, would look weird. I also wonder how weird it would be to socialize within view of the street. Not very private.

In the end I think raised beds with gravel around them will be the way to go, if I can do it financially (I was talking to one of my potential landcape guys and being very honest about my budget, apologetically telling him “I am very aware that what I have in mind may be totally unrealistic, so I don’t want to waste your time if you feel right now this project isn’t for you”. The guy I spoke to really appreciated my candor.) 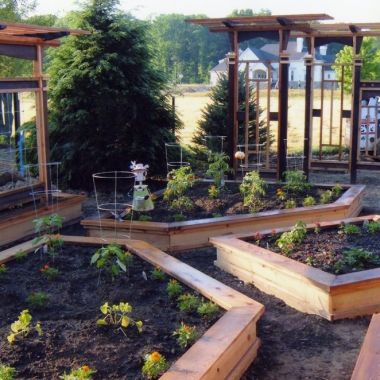 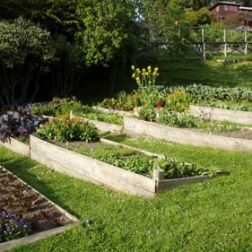 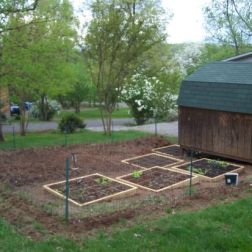 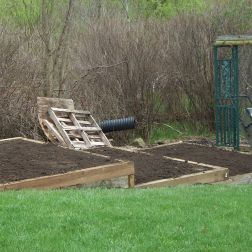 I also have a little patio which is great for entertaining. However, when I have friends over and want to use the fire pit, we have to move all the patio furniture to make space for everyone to comfortably sit around the pit (I guess we’re earning our s’mores with the post-dinner furniture moving). This isn’t such a hassle really, but it would be nice if we could simply get up from the patio table and relocate. 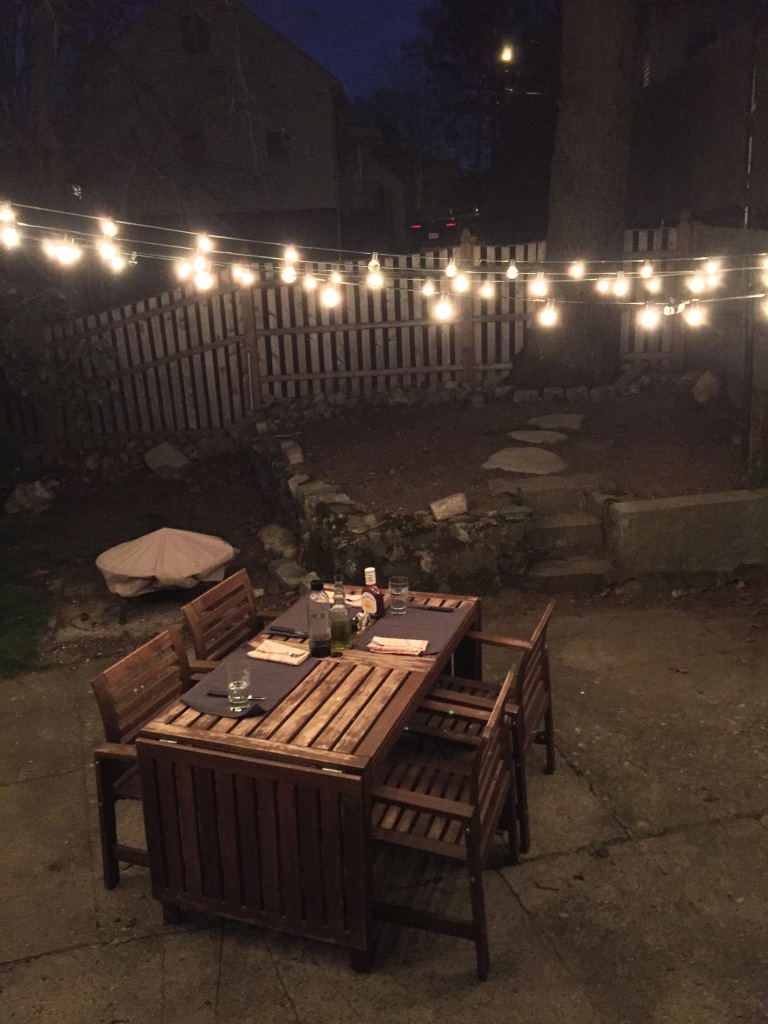 In the background there you can see a slightly risen-up area. I tried growing herbs but I couldn’t really get into it.  A lot of work with little return, if you ask me. Last year I completely weeded it and planted low-lying ground cover which never grew. Not at all. And I had to put huge effort into keeping Harlow out with little fences because Harlow loves to flirt with the neighbor’s cat through that fence over there, and also the squirrels love to tease her and she takes great pleasure in digging up the dirt while digging in her paws to lunge uselessly at the rodents.

Also, as you might guess, she could hop the little fences with great ease, the little punk.

I made those concrete blobs with aspirations of maybe covering the whole area with them but knew I needed to consult a pro, especially considering it’s not level. It’s also filled with rock like the rest of my property. In the past when I have tried to plant, I have needed to seriously excavate to make room for soil.

Now I’m wondering if I could have a pro level it off, and have it filled with gravel or better, stone. I don’t love the idea of having new, pristine, fancy stone. I love that my yard is so weird with its random steps and retaining walls, so I wonder if I could do something that keeps with that. And then maybe that becomes the fire pit spot. And viola! No more mud for Harlow to bring in anymore, too! 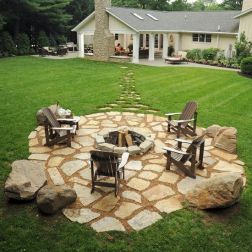 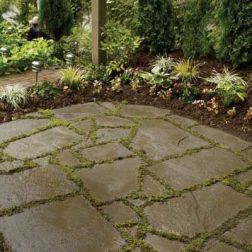 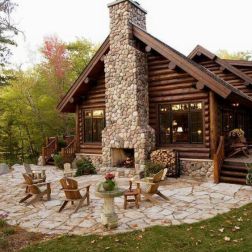 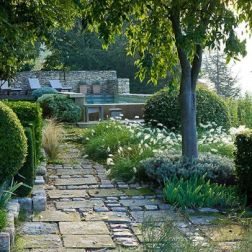 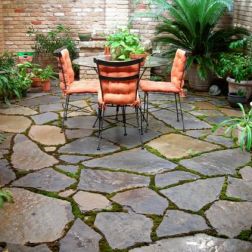 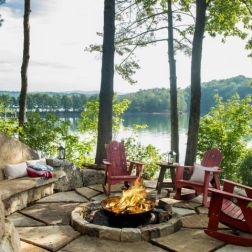 I won’t get into how I’m nervous that I might regret spending money, when there’s s threat of reduced health insurance coverage under our new political regime. Everything’s normal! Everything’s fine! I won’t lose coverage for my diabetes! It won’t happen to me! It’s the head-in-the-sand technique that I have involked of late.

You may have caught this video in my stories so apologies for the redundancy but I can’t help it. It makes me so happy I need to post it so I can see it again whenever I want. I didn’t know when I shot this while waiting at a light, that this guy is a regular to this intersection, sometimes even using a pole to practice pole dancing on. From my commentary you might sense that I was concerned about him. Maybe he’s mentally ill and needs help? As I thought on it while laughing through tears after driving past him I realized that the wearing of pink underwear was far too premeditated for someone who didn’t have a plan. This guy made me so happy. Just doing his thing, getting a workout, and making people smile. I really needed it. 💃🏻 🩲 🕺 🚗 ❤️👏🏻
Her post-bath hair band look would 👏🏻 not 👏🏻 let 👏🏻 up! So I literally had to cut her “bangs”. 😂. Apparently the pre-bath dirt had been keeping it out of her eyes
Cat’s eye view. If there was a cat in the house.
#hanes had a big sale on sweatshirts. I got a maroon one and loved it so much I got a purple zip-up hoodie and this one too. I think this one’s perfect for my side gig as a traffic cop! #comfy
It still counts even if you’ve only known your sibling for a bit under three years, right? Happy Sibling Day to my Little!
Happy National Sibling Day, @chrisjscott !