I had a huge list of things I wanted to accomplish this past weekend in my yard. I actually really enjoy working in my yard, although the overabundance of weeds and vines leave me feeling like I never make any progress.

Friday, on my way home from work, I stopped at Home Depot to buy a ladder. I needed this ladder because it seemed like a smart investment, but in the immediate future, I was planning on climbing said ladder on Saturday with a chainsaw in my hand and my dad at the bottom (though not directly UNDER the chainsaw), to cut back the maple tree a bit and allow some light to come in.

The ladder was collapsible which was very large once unfolded. I headed out to my VW Golf with it and after doing some eyeball geometry (yes, that’s a real thing), it was clear I wouldn’t get this ladder home without damaging my car (I could have allowed about four inches of the ladder to hang out a back window, except that back window doesn’t go all the way down, which means if I hit a bump, that window’s gonna break). I turned around and hauled the ladder back into Home Depot where I promptly returned it.

Hm, Okay. That didn’t work. I called Dad, who was to meet me the next morning (Saturday) for this project and asked him to instead meet me at the Home Depot near his house do I could buy a ladder and we could put it in his Jeep and bring it back to my place. “Why do that?” he said, “Just borrow mine”. Because I would very much liek to not harrass you for a ladder every time I need one. He wasn’t biting though.

Long story short (longest story about a ladder ever), I went to Avon Street and helped Dad get the ladder on top of his car, rented an electric chainsaw, and he and I took turns removing a few branches. He gave me a lesson on how not to cut off my own leg and I returned the chainsaw in the afternoon without incident.

This is actually a big deal for my family. The “without incident” part. We tend to have incidences with sharp objects.

When Dad was taking his turn up there, he surveyed the stumps left behind by last year’s trimming back of the tree, “Were these done by (your ex)?” he regarded the cuts disapprovingly. I’m not sure if it was about the cutting job or the person who did it, but I knew what Dad was thinking. I can do that better! Let me just clean that up real quick!

“NO!” I shouted at him, “I know what you’re thinking and leave it! I don’t care what it looks like!” I might have sworn at him but up to this point no injuries had occurred and if one did happen while Dad was prettying-up last year’s trim job, I was gonna be pissed. When you really want your chainsaw-weilding, precariously balanced father out of a tree for his own safety, dropping the F-bomb is no big deal.

Meanwhile, the ladder we used had a giant dent in it. Dad was all “You keep it!” and I was all “It’s to heavy for me!”  So we left it on the curb with a warning and it was gone by noon.

Maple tree trimmed, Dad left and I was onto the next thing on my list. I don’t remember what was on my list, but I found something else more pressing. As I was moving all the maple branches to the patio so I could cut them to smaller sizes at some point, Harlow saw something of great interest, bolted across the lawn, rocketed across the raised bed of dirt and threw herself at my fence where it meets at a corner. She threw herself so hard that one section of the fence bowed. So, I decided that stabilizing my fence and deterring her from re-enacting that move took precedent over the other stuff on my list.

Some parchment paper, spare wood and a saw and the fence was “fixed” 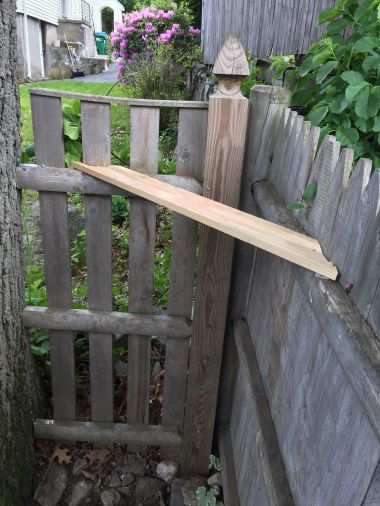 Harlow’s going to be super-helpful here. I can tell.

Next up…I bought a “Gorilla Cart” the other day and it needed assembling. It was a tougher job that I expected it to be, because there was plastic inside each of the bolts I was trying to screw-on. Eventually I figured out that I had to soldier through those plastic pieces and that they were there to keep the bolts super tight. That cart was the best investment of my summer thus far, and I also love that a few of the bolts, while holding strong, are not screwed in all the way, so when I use the cart, some loose washers tinkle as it rolls. It took me a solid hour to assemble.

I also spent a lot of time this weekend bleaching my porch swing. I’d never put any sealant or anything on it, and I didn’t know that I needed to. I put the swing in the basement for the winter and it returned with mold on it. So, I also scrubbed the mold off the swing on Saturday and teak oiled it Sunday.

Then I planted a Lilac bush. I had serious concerns about its location, but in the end I had to just go for it. I over-think everything and it gets old. Last week I did a soil test and the results told me my plants wouldn’t be poisoned, so now it’s just a matter of wehther or not it will get six hours of full sun. I sure hope it grows! I also hope the dog doesn’t destroy it.

Digging holes is hard though, you guys. And frankly it’s discouraging to find that I am not as strong as I used to be. At twelve I had a vice-like grip and could open anything. Mom was often handing me jars. I remember when I was about ten, I was with Dad and the car broke down. I got out to help him push the car, and he said that it was no trouble and he could do it. I pushed and the car moved much faster. My dad didn’t realize his kid was SuperGirl.

But now I’m lame and my back gives out kind easy.

This is where I really strayed away from my list for the weekend. I was looking at my wood rack situation. I really wanted to make a cover for my wood pile, but Dad ensured me that in the cape, we use wood that’s not covered up and it works fine. I’m not so convinced, but I did realize that my current rack didn’t have enough room to accommodate the new maple tree branches which would need to be stored somewhere. So what did I do?

I weeded a large area, made tracks to keep the wood up off the ground, and mulched around the area to keep the weeds away and also, cause it looks nice and I’m my mother’s daughter.

Let’s see, what else. Um, Harlow spent the day doing extensive research on the patches of dirt throughout the yard as I moved from one locale to another. I’m not sure of her findings but she says she working on the charts. After her fieldwork though, she got a bath (I hosed her down outside).

Don’t worry, o Monday it rained, so it was muddy out and she’s back to her proper grubby self.

Saturday night I decided that the section of land in front of my house needed to be weeded for real. Like, remove all the greenery and plant the Snow in Summer. Trimming that area is a real bear because it’s four feet off the ground and having simple ground-cover will help. When I checked the time towards the end of my weeding and seeding in front of the house, it was 9PM. OK, I think I’ll call it.

One Sunday I cut up all those maple branches and got the leaves into bags. I did other stuff too but I can’t remember. I do remember how completely fried I was, and how I had a four-hour photo shoot that night and wondered how I would make it through it.

Lots of stretching and some Ibuprofen and I was good to go!