I woke this morning a little earlier than I would have liked but since I’m in this amazing place and want to see more of it, I’m OK with that. I went upstairs to find an absolutely glorious, sunny morning. Yay! Rain-free finally!

We were pretty sure it wasn’t going to last but were hopeful that our weather apps were accurate and there would only be a 40% chance of rain in the afternoon. We planned on visiting the local market, getting a bite to eat (maybe some croissants there?) and maybe catching a boat to Lokrum Island which is said to be inhabited by many peacocks and bunnies.

We sat in the beautiful sun and enjoyed our breakfast, which was only OK but we didn’t care because SUN! Libby ran back to the apartment for something and I went to check out a church, near which there were some steps used in the shooting fo the show Game of Thrones. Then the skies opened up and it. Was. Biblical!

With the torrential downpour, no Lokrum Island, no cable car with lunch on the mountain (another option we were considering). We met back up, a bit forlorn and decided to visit the War Photo Limited gallery, a photo gallery which was coincidentally located ont he same little alley as out apartment. It was in that gallery that I came to really understand what went on in this region in the early ’90s. Libby reading to me about it didn’t stick, hearing locals explain it didn’t make sense to me, but photos and captions? It all came together a bit better.

While we wandered around, quietly taking in the incredible work and awful carnage that happened just outside this gallery’s door, the storm, which was hard with thunder and lightning, began to die down. 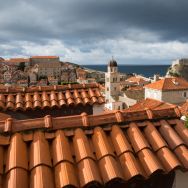 The morning view from our Air BnB

I saw the woman on the left walking down the street with the little girl and since they matched I wanted to photograph her. When she passed by again with this other woman, I stopped them. They were flattered to be asked for a picture. 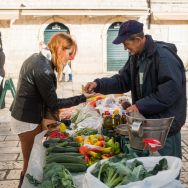 Libby bought what we thought was an apple, but it was bitter and not edible in the end.

Before the rain hit

Our feet were soaked through and the temperature had dropped quite a bit, but we wanted to go for coffee anyway. As we sat down at Sesame, a little place outside the city walls, I sat thoughtful of what to do next. Libby said “Remember, this IS the activity!”

I appreciated that a ton. I don’t always remember that one doesn’t need to plan every minute, even if the planning is to do nothing in particular.

Random people I “secretly” photographed during our coffee break.

Random people I “secretly” photographed during our coffee break. 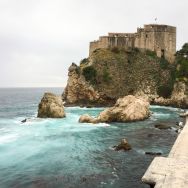 Incredible view before entering back into Old Town Dubrovnik

Incredible view before entering back into Old Town Dubrovnik

The entrance into the old town 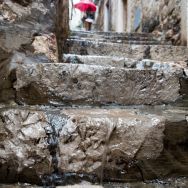 The stairs were flooding from all the rain!

We took a little walk after our leisurely snack and coffee (I had a little bunt cake with raisins and lemon called a turban cake (because it looks like a man’s turban) and headed straight back to the apartment when we realized we were simply really cold and our feet were soaked through. Our host, Vloho told us to turn on a wall heater to dry shoes and there has been one item or another precariously balanced on it since our first return from the rain (yes, we turn the heater off when we’re not around). Two of my shoes (from different pairs, of course) have warped in their insoles from the heat.

In the evening we went for Thai massages at Touch of Thai. After my experience I’ve decided it should be called Tug of Thai. I’ve never had a Thai massage and it was quite an experience. If you ever have one and are like me and not very flexible, tell them so! And ask them to go easy.

We wrapped up our evening by going back to the restaurant we really liked earlier in our visit, enjoying more of their delicacies, and learning that no, in fact, neither of us like monkfish even if it is wrapped in bacon.

Please remember that while I’m happy to share my photos, they are not for reuse, borrowing, downloading or copying.