Yesterday I stayed home sick from work. I’m really grateful that I seem to rarely get sick. I think Mother Nature’s like “yeah, I think Type One is enough to deal with plus you ate a lot fo dirt as a kid and that helped you build a great immune system long-term”

Or something like that. And actually, my cold is in fact giving my Type One a run for its money (my sugars tend to run high when I’m sick).

It’s a slow work week without the students and also the one publication I shoot for is currently dark (not publishing), so there is little to do. So my guilt about taking a sick day is squelched by that reality and the fact that I feel strongly about doing my best to not spread my cooties by bringing them to work.

So I was out sick yesterday with a cold, and it ended up being a crazy productive day (apparently I’m not good at resting when ill). I hung a bunch or art on my walls, did some cleaning, and I also made myself some chicken noodle soup from scratch, as well as a home remedy for cold which included apple cider vinegar, honey, water, cayenne and ginger. It is disgusting but makes me feel all homeopathic and stuff.

Today campus was closed because we got walloped by a storm. So I had another day where I woke up too early, felt like garbage, and told myself I’d rest but put away the Christmas decorations and cleaned instead. I did nap for about a half hour at one point.

I waited for the majority of the storm to pass before putting on my layers – snow pants, puffer coat, balaclava, and gloves and heading out to dig us out about 6PM.

I started at the back steps so Harlow had somewhere to pee. It first she seemed to think “hey thanks for the snow fort!” and then she thought the fort was boring and just busted out of it to go run around in the three-foot deep (in the drifts at least) snow. Funny girl.

When I took on the front of the house; stairs (which you couldn’t see at all under the hill of snow coming off my porch), sidewalk around the curb, and the plowed-in carport, I was so grateful to see Joe, my neighbor, trudge his way up to me with his snow-blower. I can get it done. or course I can! But, it really is a colossal job that gets old fast.

He started with the area where I got plowed in at the entrance to my carport which is actually the hardest to shovel out, and I helped out by taking the top layer off with my shovel so he could more easily take it on with the snow-blower.

As he finished there and started on my sidewalk, I tapped him on the shoulder and said “Chocolate chip cookies? Brownies?…”

He began to shake his head at this until I added “…or beer?” and then he responded “Either!”

Thank you for kind neighbors! 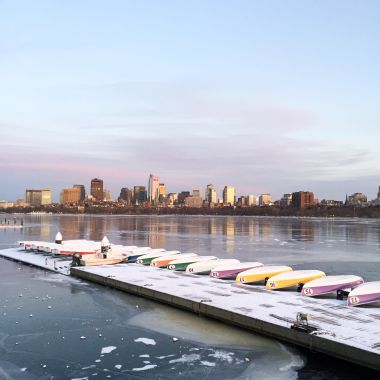 Dori visited on Tuesday! Harlow actually fell asleep on her

From Wednesday – I just love her big brown eyes!

Keeping me company on my sick day

Exploring a bit before the snow stopped.

After the snow stopped falling. This is the back door

She seemed to think it was fun

and then she busted out fo the fort.