If you needed to go down this street to get to your destination, would you think it was OK to go down the street? 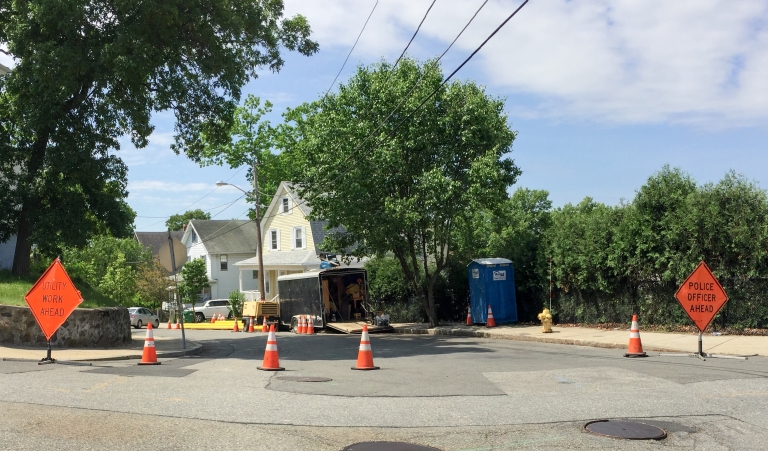 Well the other day I was heading to my mechanic for an inspection (just in the nick of time as it expires today!) and turned down this street.

About 3/4 of the way down the street I was waved down by two Medford policeman at the site of the utility work.

“Where are you going?” one said to me.
“To my mechanic.”
“This road’s closed.”
“There was an opening in the cones so I didn’t realize…”
“Yeah so the utility vehicles can get down the street!” he was annoyed and had clearly decided I was an idiot, “I don’t know why everybody keeps coming down this street!”
I politely offered an explanation, “Oh well, I saw the POLICE AHEAD and assumed that indicated that someone would be waving traffic through, but there’s no ROAD CLOSED or DETOUR sign…”
“Well I would think that the road is closed!” and now he’s sort of raising his voice to me without looking at me.
I’ve been driving for 25 years. I know how to drive. I understand signage. This guy was being a condescending jerk, full stop. I think I may have tried one more time, in a friendly way, to explain why it wasn’t clear, but simply responded again with “I would think the road is closed!”.
To which I responded “I’m not trying to be rude, sir”
“I didn’t say you were!”

Geez, who are you, my ex-boyfriend? What an asshole.  I turned my car around and as I was navigating an alternate route to the mechanic, I passed the street again, at which point I saw a large SUV exiting and in its wake, cones placed appropriately blocking full access to the street.

About two blocks from the street the SUV, still in front of me, stopped, and out came the other police officer who had been at the site. I wondered if I’d run a stop sign, or if he was about to berate me for “talking back” to his fellow officer,  “I just wanted to let you know that I’m headed to the station to get a STREET CLOSED sign. Hopefully the work on the street will be done in about a month or so” he delivered this information in a  friendly, My Colleague Was An Ass demeanor, which was appreciated. I thanked him.