I was looking forward to a date with Matthew (that’s his real damn name and on the dating site, he calls himself “Full-on-Monet”). In our messages, he seemed pretty smart and definitely witty. I appreciate some good wit. His profile depicted a well-rounded guy with a lot of interests.

He texted me earlier in the day, using the word “gnosh”. I questioned him about the “g” and he claimed it can be spelled with or without it. He held fast to this theory when I asked him about it again at the bar, not in a questioning way but in a “that’s interesting, tell me more!’ kind of way.  I have found no evidence of nosh being spelled with a silent “G”.

When I entered the bar and sat down next to him, the first thing he did was complain about the slow service of the female bartender (he arrived fifteen minutes before I did). He sort of caught himself, adding “I shouldn’t say that…” followed by a mumbling of some kind of contrition that I didn’t catch because of the shitty bar music blaring. He was awkward and his jokes were a bit on the cruel/teasing side which didn’t land well.

It became clear to me rather early on that he’s the kind of person who feels he should impart his poor-spelling wisdom onto anyone in his presence.

Our conversation wasn’t all bad, but since only the crap parts are worth sharing, I’ll share only those.

When I told him I was looking forward to the figure drawing class I’m taking on Thursday, he said condescendingly “What…like stick figure drawing?” As if to imply I couldn’t possibly do better than stick figure drawings. I attempted to enlighten him, “No, I believe we’ll actually have a model!”  To which he had the brass balls to say “It surprises me that (the school) would waste money on a model for a beginner class”. Meanwhile, I’d said nothing about it being a beginner class. He then questioned my drawing skills, asking if I did it regularly.

Now, reading this you might think this was normal conversation, but when these questions are asked in a tone that implies the person asking thinks you’re full-of-shit, it’s not longer a congenial banter.

As usual, I was polite enough about it. Mostly because I was kind of in shock over the frequency with which he spoke to me like I was dumb as a box of rocks.

We talked a bit about traveling and the company we keep when traveling. My travel companions and I do pretty well, but I did share about the time when I was traveling with friends and one friend was working one morning in our AirBnB, and I asked her “Could you delay any of that until later so we can go explore?” My friend got very mad at me and I apologized for being impatient.

His response to this story, which he was not there for, and which involved people he does not know, was “What you said was really passive aggressive! You should have phrased it differently”.

Looking beyond the fact that I had not, by definition, been passive aggressive to my friend, how is it appropriate for this guy to even weigh-in on this interaction that I told him about in passing?

Later when I told him a different story about an interaction with another friend, one which did not involve any kind of conflict, he informed me that I should have had this non-confrontational, stress-free discussion with my friend earlier on in the relationship.

Thank you for the unsolicited advice, and now you sir, can go chew on a bag of earwax.

He told me about his travels, including how much he loved the lawlessness of India, “No one cares about anything! You can climb all over the artwork in the museums. And as a guy, being able to pee in the street? It was great!”

I asked him at the end of the date (good god, how do I get that bartender to come over here faster with the check?!) where he would like to visit next. He told me Scandinavia.

I said “Are you interested in Iceland which seems to be all the rage right now?”

I decided to perry with snark, “So are you interested in Iceland?”

“It’s not part of Scandinavia!”

That doesn’t mean you can’t be interested in going.

I left somewhat amused, but woke this morning angry. The first thing I thought about was the fact that this jerk has THREE teenage daughters who have to listen to his “corrections” forever and always. This reminded me of the date I had years ago who asked “You don’t work out, right?” then looked me up and down and added,  “I can tell by looking at you.”

He too had a daughter. I worry for all four of them. I worry a lot.

And then to contribute to my anger, listening to the radio today and hearing about all the horrid men, like Bill Cosby and Kavanaugh, who’ve got away with treating women like toys to play with for SO LONG.

I don’t mean to compare my experience last night in any way to what these women have endured. I just…I don’t know.

I think it’s time to take a break from people I don’t already know and already like. 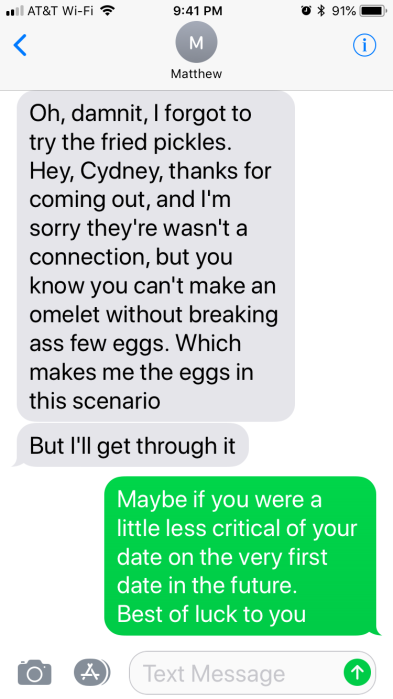 This was the text exchange we had after our date. Usually when I have a bad date I just move on. Not this time. I wasn’t “polite” this time.