This is just going to be a few random stories about Harlow.

She sat at my feet looking up at me, and when I put the milkbone out to her, she turned her snout away from it and gazed at the rawhide in my other hand. I told her “You can have this one first” waggling my hand holding the milkbone.  She took it, and with perfect comedic timing, dropped it with disgust at my feet and walked off as is to say “This is bulls&$t. I’m outta here”.

She did eventually return for the milkbone.

Thanks to the rabbit, she’s was in this heightened state of excitement already when we got to the end of the block where there was a woman talking on her phone with a dog at her feet. The dog, a small yorkie, comes running straight at Harlow, off leash. The two of them attempt to go at each other in a most comical manner considering the size difference. I held onto Harlow tightly as I continued to walk away fromthe the yorkie.

Between “meeting” that small, yippy dog, and the frequent bunny appearances, there was no calming Harlow. All chances of a relaxing, cleansing walk were gone. By the time we got home it was as if she’d run a marathon, she was panting so hard.

So, now I was gloomy and stressed. I pulled out my yoga mat and, something I’ve never done before, dimmed the lights before starting to do some stretching.

Well, this was just unheard of! Harlow was very distraught about this Yoga In The Dark shenanigans, and kept pacing around me, lying down with a big sigh, then getting back up again to pace some more and pick a different spot from where she could lie down and stare at me, still while panting hard like a creepy crank-caller.

Done stretching and doing some yoga stuff, I decided to try some deep breathing and meditation. I use the term “meditation” very loosely since for me it’s really just trying desperately to sit still and tolerate my own antsiness and desire to do anything but sit still in the dark. It’s good though, for me to sit and just breathe.

Harlow was confused though and decided this would be a good time to stand in front of me, with her nose nearly touching mine, and breath. We’re breathing, right? Is that what we’re doing? I can do that. see?

Then she moved sideways while I pet her a little bit. She then turned, like a horse, in one spot, and put her butt with IN my face. Shortly after taking this position, she attempt to back further into me. BOOP! BOOP! BOOP! Like a utility vehicle. I have no idea what this was about but, I’m not sure she did either. Eventually she just collapsed in my lap awkwardly (because that’s just how she does everything), and pivoted her head around, staring up at me expectantly.

Checking out the view in the cape.

New hiking shoes. The first I’ve ever had! 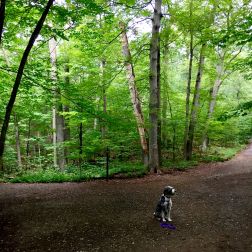 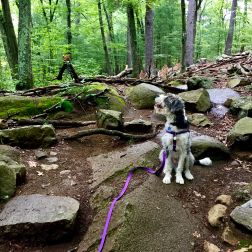 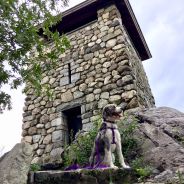 I see this tower from the highway all the time and never knew how to get to it. During this hike, we came across it by accident!

She often feels she must touch me while I watch TV. Before I took this photo, she was also STARING at me.

One Reply to “Dog Tails”