I had it all planned out, this year’s holiday card. I hand-made my dog a dragon costume. Yes, you read that correctly. She was very patient, even a bit interested, during her fittings. The idea would be a play on the fantasy show called Game of Thrones, based on a series of books by the same name. I was to photograph Harlow in her dragon costume in a wooded reservation area a short drive from my house which has lots of cool, stone walls. Very epic and castle-like. Sort of.

Above her photos, the card would read “WINTER IS COMING…” (which is the show’s motto). And then on the inside of the card, it would say “Enjoy the season!”

Building the costume was difficult and fun. What was the best fabric? How will I get the wings to attach? Do I make a plush tail, or do I put a tail over her own tail? It took lots of time, fabric shopping, thinking, measuring, cutting, problem solving, felt, and wire hanger bending to make it work. But in the end she looked adorable.

I asked my friend Ben to come with me to help on the photo shoot. We drove over to the reservation and left Harlow in the car while I found the right spot and got all the lights ready. My goal is always to inflict the least amount of humiliation and stress on her. When I had everything ready, Ben went and got her.

With all the smells and sights and sounds, she was over-excited even before I got the costume on her. After a few minutes it was clear it wasn’t going to work. The light wasn’t right and even more, she was stressed out and upset. So ten minutes in we stopped. Ben went off on a little walk with her, sans costume, while I packed up the gear.

Ben called from atop a very high rocky hill “Hello, mama!” (speaking for Harlow, of course), “look how high I am!” A few seconds later, I could hear Ben yelling “Harlow! HARLOW!!”

She had gotten away from him and was long gone. Sucker. I simply continued packing up my gear, hoping she wouldn’t go through the woods to the nearby street. Hoping that the leash dragging behind her and attached to a collar instead of the usual harness, wouldn’t catch on something and hang her or snap her neck.

I could hear Ben breathlessly calling to her, and occasionally, she would come flying out of the woods into view, moving at the speed of light, nothing stopping her as she bolted over rocks and splashing into the marsh nearby, then bounding into the woods in the other direction.

I’d call to her from time to time, but knew I’d just have to wait. She was completely out-of-control. Upset from the costume and the posing and the photos, and in a place that is so exciting to her, once she broke free, she didn’t know what to do with herself. She could not hear me and could not see me in this state of white-hot over-stimulation. I truly don’t even believe she has control over anything in this state.

I called to her that I was leaving and began to walk to the car with the gear. Going towards her was useless, and I couldn’t go running after her with all the gear on me anyway.

She did not care.

I put my gear in the trunk and got a plastic bottle which makes a very loud, satisfying, and alluring crunching sound when squeezed. I used that to try to get her attention.

She did not care. She acted as though I did not exist.

She continued to hurricane around. Fortunately at this point, she kept within sight. She didn’t know what she was looking for. She didn’t know what she wanted or what her goal was. The best comparison I can make is trying to reason with someone who is completely emotionally out of control. Or having a breakdown, perhaps. You just have to wait until the calm down a bit, because they simply cannot hear you until then.

But she did, after about 20 minutes, come out of her fog and head towards me, at which point I took hold of her leash.

We got her hyperventilating, over-salivating self home. Once inside I checked her body and sure enough, scratches all over. Nothing severe, but how upsetting – Not even pain slows her down.

She was exhausted for the rest of the night. I’d say she was also sad, upset with me, but I know better. I know I am seeing things that are not there.

I had a new trainer come and work with us a little over a week ago. While much of what we learned is a repeat of past things, it was important to be reminded of old things and be taught new stuff. It’s hard to know that a dog can behave the way it does because of your actions. Saying “No thank you!” when she does something annoying when actually, I should simply be ignoring her. Any attention is attention, the trainer said.

All this aside, I know, My Harlow is who she is, and when she gets loose in a scenario like that, there is no amount of training that will stop her or get her to even remember I exist. The other stuff, like walking on a leash in a nice way so I don’t come back from a walk in tears, can be improved upon, but some things just aren’t going to change.

As for the holiday card, well, it will have to be something different this year! 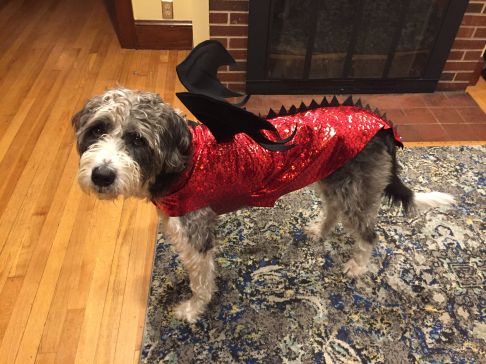 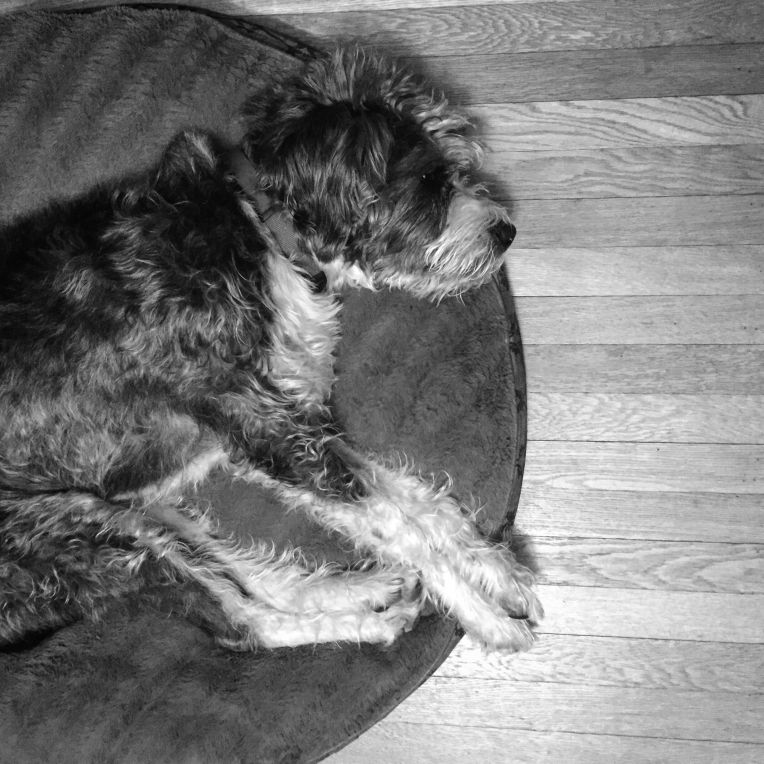 Exhausted from all the excitement