I LOVE YOU. The other night when I came home very late (12:40) after covering the BU men’s hockey game, I plopped on the couch to veg out for a bit. It’s sort of a wind-down ritual that I have every night. Harlow climbed up next to me, laid across me, and fell asleep. After a while, I said to her “I love you, puppy”.
Thwap! Thwap! Thwap!
She did not look up at or even open her eyes and nothing but her tail moved with a series of thwapping wags in response to me talking to her. It was sweet.

KILLING MOMS. Feeling the winter blues, I texted my parents last weekend and invited myself over for sunday breakfast. Chatting about this and that, Mom was trying to remember the name of an actress who was nominated for an award this year. Two popular TV shows, How To Get Away With Murder, and How I Met Your Mother, became the ultimate mash-up when Mom incorrectly recalled the actress’ show and said “Oh, its How To Murder Your Mother!” It was incorrect and charming.

BACK ACHE. A few mornings ago I went into my carport with my arms full of various bags needed for the day. As I approached my car, two frantic birds flew out of the nest I didn’t know was currently inhabited. The carport is a tight space, so they really just flew around in a panic near my head and returned to the nest, or maybe left the carport. I’m not sure because I was two busy marveling at the fact that I’d just been so startled by them that I actually felt a twinge of pain from a muscle in my back. I’m that out of shape that being startled almost causes a need for a dose of ibuprofen.

FEMORAL ARTERY. I woke in the middle of the night sometime within the last few weeks and got stuck on a problem that I felt compelled to solve; what if a sliced my femoral artery? No, I don’t mean I would do this intentionally. I wondered what I would do if I were injured and that injury including the serving of this major artery in my leg. How quickly would I die? Could an ambulance get here (to my house) fast enough to save me? What about the dog? Would Harlow attack people trying to help me? Maybe I could tourniquet myself? I was awake for two hours though I don’t think I was obsessing on this one issue. I did make the mistake of googling it though. I didn’t look at pictures, but I did learn you can die within 5 minutes. I also got to wondering how I would sever this artery. I’m a super safe person. If I’m using something sharp I’m always thinking about where it would go if it went beyond it’s intended path. If I use this exacto knife in this way will it slice my femoral artery? Maybe. I’ll reposition.
It was a very strange thing to get stuck in my head in the wee hours and I haven’t been able to figure out how it came so be stuck there. The only thing I can think is that when I imagine this awful injury, it’s in my right leg, which is the same area where I currently have a hip injury that won’t heal. 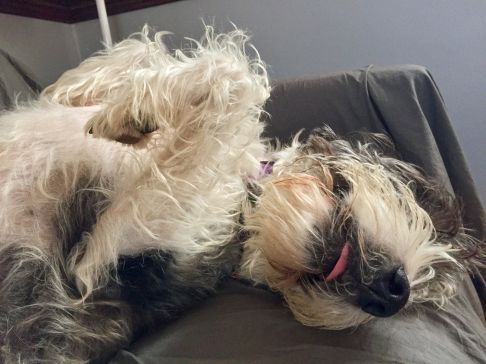 Harlow napping. With her tongue out 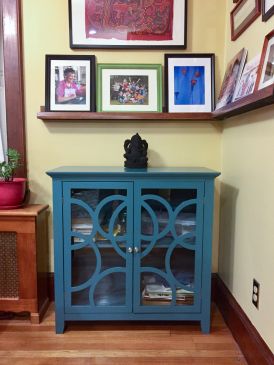 A new piece of furniture which I love, to store some painting supplies.

I made two new little end table for the couch arms. I wish I’d chosen a harder wood, but all in all, I’m happy with how they came out.

I got my hair re-dyed and had some layers added in so the purple shows up a bit more.

It’s cold here. Somehow, despite the fact that it’s freezing, water keeps building up and up. It’s actually pretty beautiful along my stone wall…where I don’t have to attempt to walk on it!

Ice in the backyard

Ice on the stairs

Ice on the sidewalk between the stairs and the carport 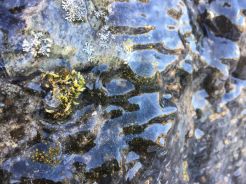 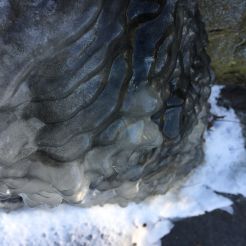 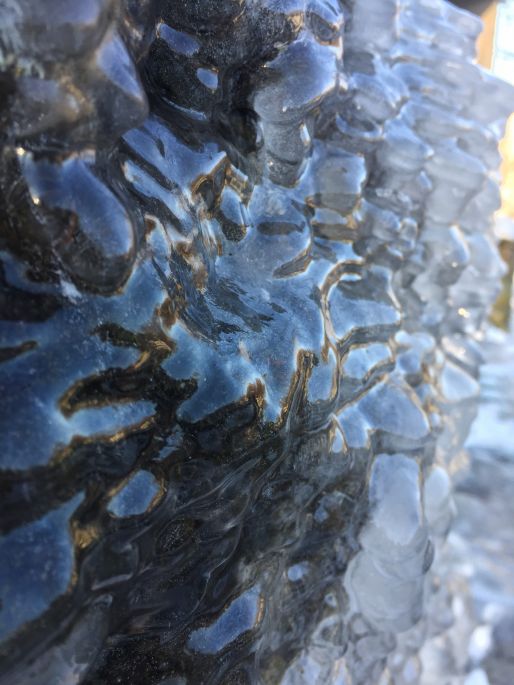 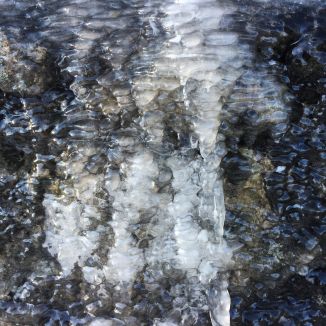 Here’s a video of Harlow playing with cauliflower. The system may or may not allow you to access it. But it’s worth trying  https://photos.app.goo.gl/73M3rxVtp6Eq8ICJ3

One Reply to “Vignettes”