Tomorrow I am attending training to learn about the next step in using my new insulin pump. Right now I use the pump along with the Continuous Glucose Monitor (CGM) on manual mode.

I “install” this little device and tape it down with a bunch on tape which irritates my skin when removed (but fortunately, doesn’t hurt or itch like some people experience) and I wear it for about seven days before removing it and replacing it with a new one. 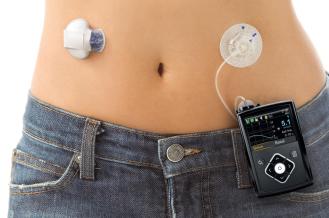 It looks like this except way less sexy (at right). The white shell is the part of the CGM that transmits the sugar number to the pump itself and in reality is covered with tape.

I still have to check my sugars regularly which in my opinion defeats the purpose, but I’m used ot it anyway so I don’t care too much.

At the suggestion of a friend, I joined an support group on Facebook for people using this system and it’s been really educational. Peronally, I have found that the number the CGM is coming up with and the number I get when I do a “fingerstick” are completely different. Not ideal. I learned on the FB support page that drinking a lot of water is important to help the CGM make accurate reads, that wearing the CGM where your waistband may push against it can effect results, and also that using the back of your arm can be more effective, among other things.

I’ve used the device on my stomach for the first two rounds and have been super unimpressed with the results. The system was regualrly waking me up in the wee hours of the monring to tell me that my sugars were rapidly dropping. I would get out of bed and check them the “old fashioned” way and they would absolutely not be dangerously low. Perhaps the device is lacking, or perhaps I was experienceing a “compression low” which happens when you are laying on the CGM causing constriction and a false reading.

Last night, I put a new sensor in on the back of my arm and left it to “marinate” (a term and technique I learned from the support page) for the night before turning the device on so it could start communicating with the pump. Typically you put int he CGM and connect it wirelessly to the pump immediately, and in the morning.

Getting used to it on the back of my arm hasn’t taken too long, especially considering it bled a bit and is slightly uncomfortable as a result, and while the CGM and pump have only been communicating for a few hours, the numbers they are both producing are much closer than the numbers I was getting when the CGM was on my stomach.

After tomorrow’s training the next step will be to switch the system into auto-mode. Auto mode means that when I’m about to eat I will still need to check my sugars, log in the carbs into the pump and tell the pump to administer extra insulin, but aside from that, the pump should communicate with the CGM to make any micro-adjustments needed to keep me in the tightest, healthiest rage possible (your sugar levels can move all over the place even if you’re not eating, so it’s not just food effecting sugar levels)

Good stuff if it works. We shall see!