A few years ago, prior to my annual visit to Florida, Libby mentioned casually that on the west coast of Florida you can take a tour to swim with manatee and OH MY GOD ARE YOU KIDDING THAT’S GOING STRAIGHT TO MY ITCH LIST AND MUST HAPPEN!

It didn’t happen that year but this year we made it happen! I did some research on TripAdvisor and found a company that does tours with only six people on their boat at a time. I think they were the highest rated tour, which is why I looked into them, but I also really liked that we wouldn’t be part of a crowd of fifteen humans harassing a poor manatee minding his or her own damn business just eating some grass and blubbering along in the water. 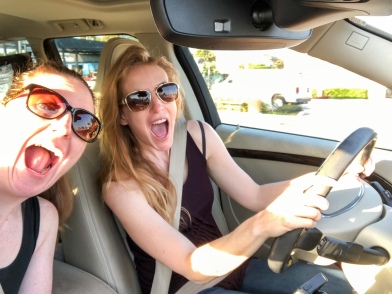 Libby and I got up early on Monday morning. The drive was about four hours and we planned to stop for lunch. As it turned out, our lunch was very unexciting, but considering I was feeling queasy, as has been the case on and off for a few weeks, (Stress? Some food intolerance? A medication side effect? My Imagination? Your guess is as good as mine) a simple lunch was just fine. There was something about this weird place that was comforting. I think it was because it seemed like a place you’d find on Cape Cod where locals go to eat. 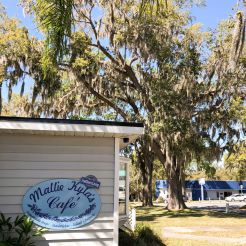 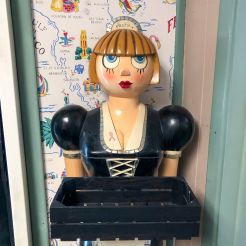 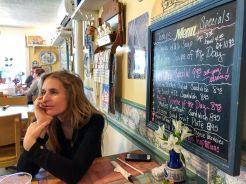 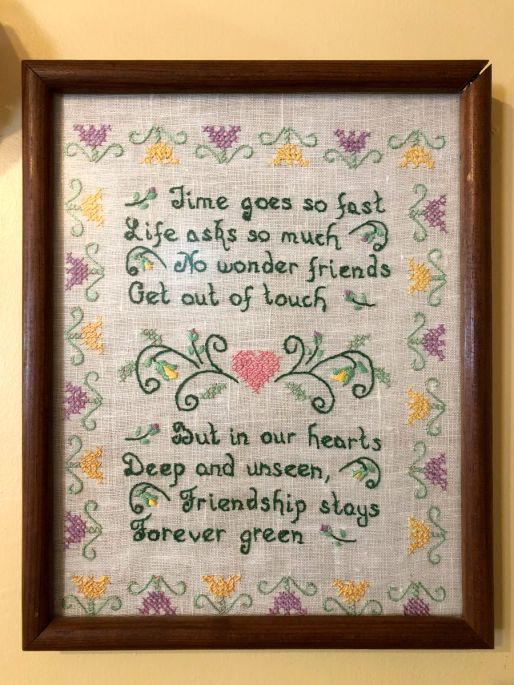 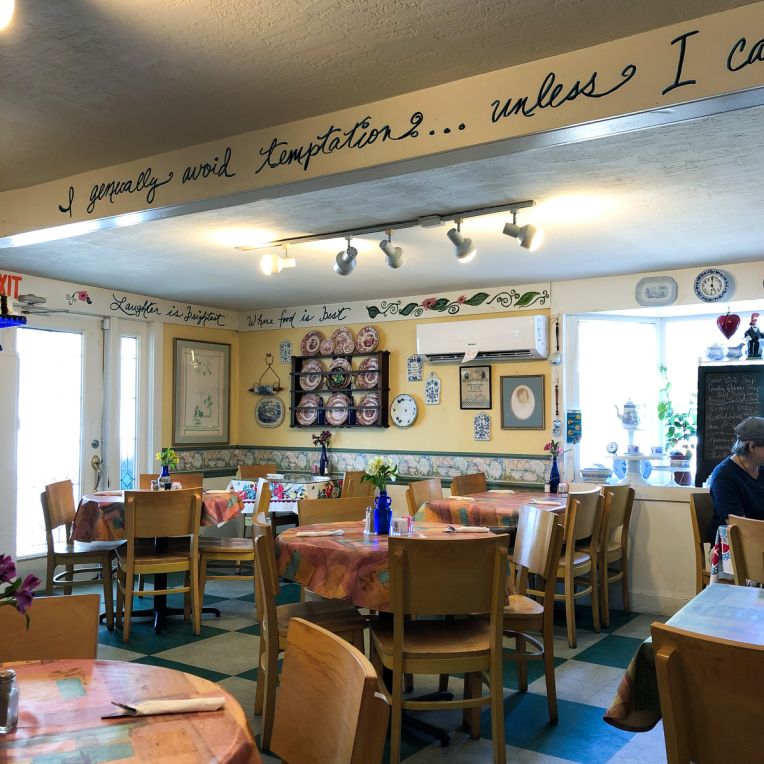 After lunch we continued on to Crystal River, where our tour was taking place. We checked in with a kind, bleach blonde, very leathery looking fellow who had a haircut from the ’80s, and he sat us down with a family of three – a couple and their friendly teenage daughter from Saratoga Spring, NY- and we watched a brief movie about how not to be an idiot when swimming with the gentle giants of the sea.

When the video was over, we were told the rules again. We were reminded that they are shy animals and start easily.

We were given wetsuits to wear for the three hour outing. Here’s where things got nerve-wracking for me; In theory my pump is waterproof, but it’s not a risk I’m willing to take. So, I put my wet suit on up to my waist, and planned on disconnecting from my pump (which at the time connected to me via it’s 2.5 foot long tiny tubing between my hip and bellybutton) right before going into the water, putting the wetsuit on the rest of the way, and just hoping my sugars don’t rise like crazy over the next few hours and make me feel sick (the pump gives me a very small amount of insulin at all times to keep me level, which is what your functioning pancreas does).

Taking the wetsuit off to “plug-in” the pump again and take a small dose of insulin if I needed would be very difficult considering it’s wet, snug fit.

In the end, oddly, my sugars stayed comfortably low. Maybe I was shivering so much in the cold that I was burning sugar? I have no idea. But in the end it all worked out just fine. In the many years I have been using a pump, I have never gone so many hours disconnected from it at one time!

OK, on to the more interesting parts – We were given a pool noodle and snorkel gear, no 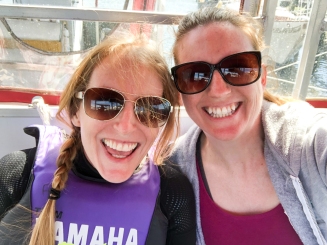 fins. Our captain, Dan, would spot a manatee and gently drop anchor. The first he saw was in a very brackish area and I wondered if this “crystal water” of which we were told even existed.

When we dropped into the water for our first seacow visit, it was extremely shallow, but you couldn’t stand up in it because it was squishy, slimy, soft surface and I think you’d sink and get stuck. Also, I remembered as I went in how you really have to focus on not panicking when first adjusting to breathing through only your mouth with the snorkel.

Dan pointed in the direction of where he saw the manatee and the four of us (the Dad panicked and waited the first dip out) paddled in that direction. Such a bizarre sensation to swim through water so unclear that you fear that one of the world’s slowest animals with somehow pop up right in front of you and startle the crap out of you. That’s not the case though, and to be honest I was a bit disappointed with that first anchoring down, because the water was so unclear.

We got back in the boat and puttered around some more. I was really discouraged (but I suppose I shouldn’t be surprised), that there were many other boats out on the water doing the same as we were, only there were at least 15 people on each of their boats.

Our captain told us that we could touch the manatee and that sometimes they may even turn over for a belly rub. “If they have a barnacle on their back and you scratch around it, they love it because it’s like a mosquito bite” he told us. He also showed us around the area. There were various springs which were crystal clear (ah! that’s where the name comes from!). He pointed out certain areas where retirees who volunteer were stationed near sanctuaries to keep people out. The sanctuaries were little coves which were roped and buoyed off from everyone but manatee. It allows manatee to have a place to go to get away from humans and dig into some fresh, undisturbed seagrass. Mmmm, nature’s salad!

Our next anchor down was a bit clearer than the first location. Our captain whisper-hollered to a tour that was visiting a manatee and asked if we could join. As we approached, they graciously gave us a turn by heading back to their boat. Before doing so, one of their guides grabbed each of our hands and led us directly to one of them.

He. Was. Massive. And amazing. And actually, moved pretty fast for being a giant blob with fins!  They disappear into the brown water quickly, and from the boat, Dan continued to whisper-holler directions to us “About 90 degree to the left of the gal in purple! Oh…now he’s turned again and he’s by the back of that sail boat!”

I joked later with Libby about how funny it would be if in the end there weren’t really any manatee at all, and Dan was just leading us around making us think they were there and that the problem was actually our terrible manatee tracking skills.

Libby and the girl (the girl’s parents were done with this activity and stayed on the boat for the duration) were a distance away when I had a “moment with nature” all on my own –  I brought my head above water when suddenly, about six feet in front of me, a manatee popped his squishy mooshy whiskered nose into the air, took a watery breath, and was gone just as fast.

I squeeled in my mind and I wanted very much to squeeze his cheeks.

Later, another one (or maybe the same?) swam in from the up-left of my field of view while I was doing the dead man’s float, face under water. He was no more than three feet below me and was using his small side flippers to truck himself along the bottom of the water. He ate seagrass as he passed and I reached out and lay my hand flat on his back as instructed, my hand running the length of him as he continued by. He felt as I’d imagine a wet elephant with gobs of soft stringy seaweed attached to him would feel. Slippery but solid.

I was charmed and it was an incredibly cool experience.

I touched another one a few times but each time, he was so huge and so close to me that he almost seemed like a giant slimy rock. I couldn’t see his head or his flippers at all with the kicking up of muddy sand blocking view.

We got back into the boat for quite a while, not finding any more. That was OK by me. I’d had my experience and it was more than enough.

The views were beautiful and the sun was bright. It was very cold unfortunately, but worth the cold for the experience!

My photos are seriously lacking here. I bought a waterproof bag for my phone, but the phone’s touchscreen wouldn’t work when it was submerged. Even more odd, the side button which also can be used to shoot photos woulnd’t work either. I mentioned this when I was back on the boat and Captain Dan said he was familiar with this problem. He suggested I start a video above water and just let it run. That worked but I didn’t happen upon any manatee while running video.

To think – I actually just experienced something rather than document all of it! 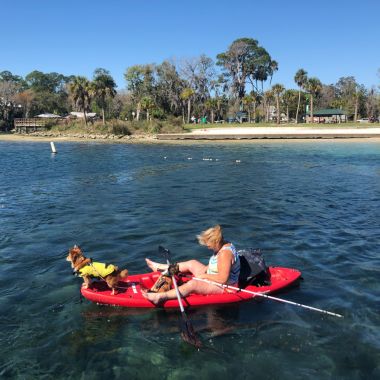 a passing paddler with her tiny dogs! 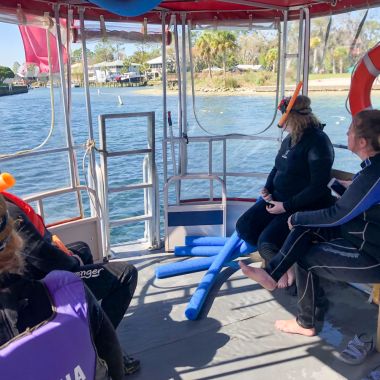 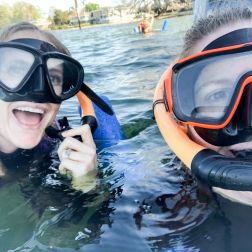 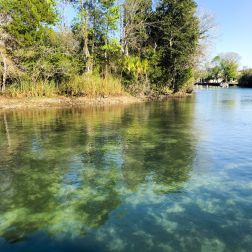 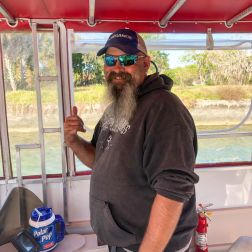 We left our manatee experience glowing. Capt Dan suggested a nearby bbq joint to Libby and I and we decided to partake in “first dinner” there; Burnt ends and a cornbread pancake. From there we checked into out adorable Air BnB after stopping on the side of the road to marvel at the sun setting… 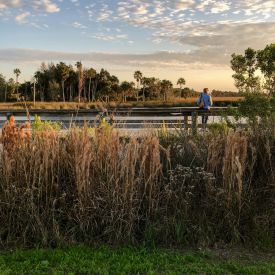 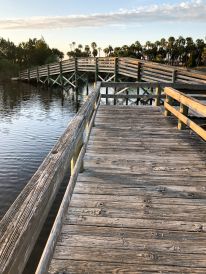 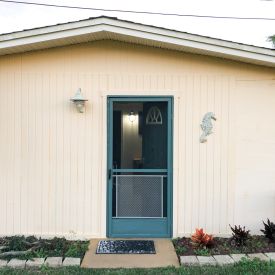 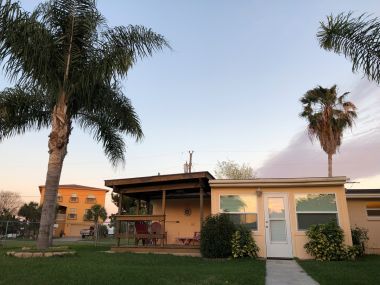 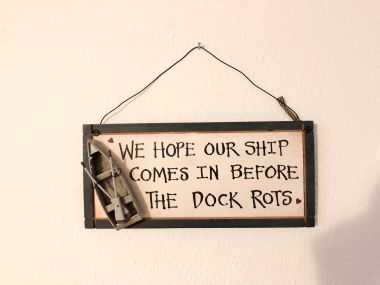 We had fat naps, went to a nearby place to have a quick second dinner, then watched Downton – I’ve made her a Downton fan! {Twists invisible moustache conspiratorially} – until the battery died on my laptop.

It was a good day.