Typically when I am prepping for a travel adventure, I do not feel myself getting excited or looking forward to it. I have stuff to do before I go, and longing to go only makes the wait that much more torturous. But this time, I was particularly excited to get the hell out of cold, dreary dodge and hang out in some sun and lower traffic areas for a bit.

My flight to West Palm Beach was very early in the morning on Thursday. The final 20 minutes of the flight was super turbulent, and despite having taken some anti-motion sickness meds, I was feeling very green by the time we landed. That combined with a high blood sugar and I truly felt like trash as I was collecting my bags from the belt. I met my friend Thomas for lunch and apologized to him for being out of it. I still feel disappointed that I wasn’t very present thanks to feeling like a nauseated zombie during our annual catch-up.

Libby, her husband Adam and I went to check out the Flagler Museum on Friday. It’s located on Palm Beach and I can’t believe it but I never went in the over six years I lived in FL. The museum is in Henry Flagler’s Gilded Age estate called Whitehall and was completed in 1902. (click on the photos to enlarge) 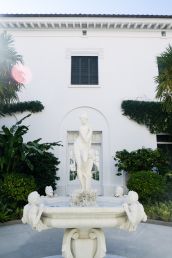 Our favorite room for it’s hideousness

The next day was the Lake Worth Annual Street Painting Festival!  This was our eighth

time participating, Shannon and I, and we were excited to get going on our octopus taking a bath. Unlike past years, quite a few people stopped to ask how we came up with our ideas. We told them that this year Shannon suggested we do an octopus wearing a top hat, and monocle, drinking tea. I did some sketches, adding a book for him to read. He was very dignified but boring somehow. I was thinking on it a while back when putting him in a tub came to me. He’s very cheeky and we like him a lot, naming the “piece” Rupert’s Me Time. We decided that when he’s not in the tub he wears his monocle and top hat and that this likely means he is dignified and British, so I suggested Rupert.

Shannon and I were lucky – we got a perfect location on Lucerne Ave where it was mostly shade which made me happy. I packed bananas this year and bought little tablets to put in my water to replenish electrolytes. It made little difference – I still felt the next two days like I’d run a marathon – my legs aching so bad that it hurt to get in and out of the car, walk stairs, sit down, stand up, you name it.

The price I pay for art!

Shannon’s splattered foot from the black tempra paint we put down as a base. 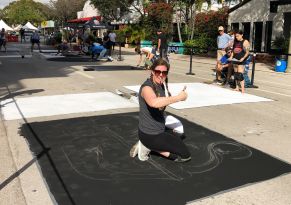 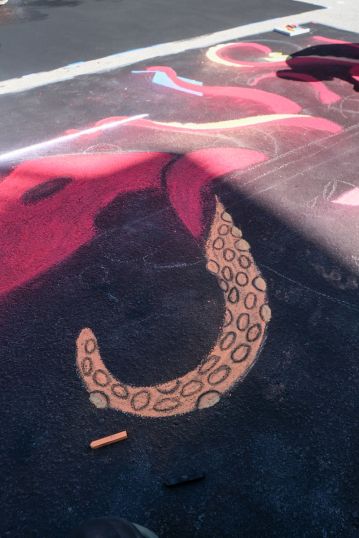 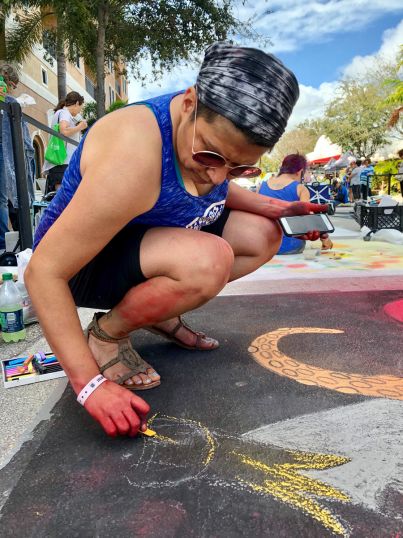 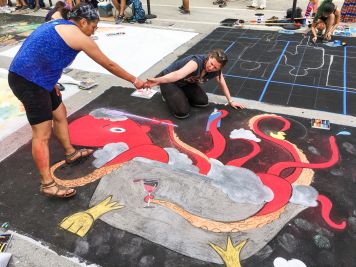 I’m not as angry as I look! 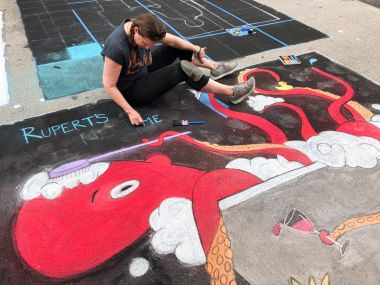 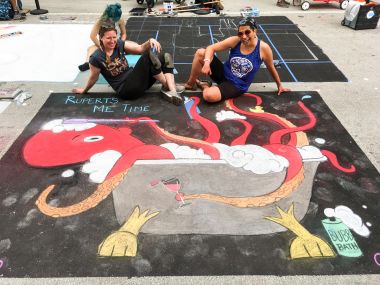 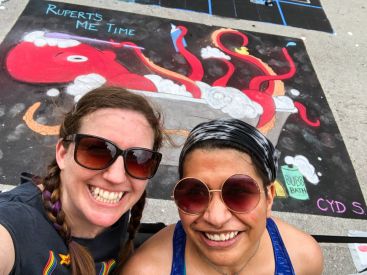 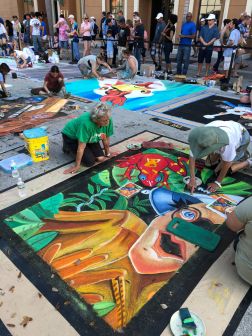 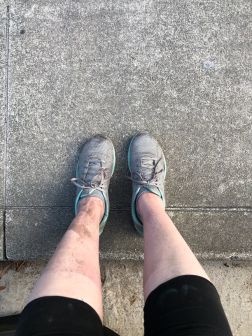 That night we all had a delightful Indian meal together, and on Sunday, Libby and I went to find the Downton Abbey exhibit. Located in what used to be Macy’s (that was weird), we were surprised at how expensive the exhibit cost – $40! But once inside, it was clear – this was a legit exhibit with actual pieces of clothing from the show, interactive screens, original props, great photography on display, and accurate to scale recreations of the sets!

It was really fantastic, and even Libby liked it even though she hadn’t seen the show yet. After the exhibit visit though, we watched a few episodes and now, days after our visit and my return to the cold north, I get texts from her like “Thomas is really a shit isn’t he” and “Ooh Mathew is kissing the girl with a stick up her ass”

I’m rather proud to be part of her discovery of Downton!

the servants dining quarters. the halls surrounding this area were to scale of the set as well. 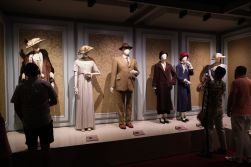 this one’s my favorite