I had high hopes for my 42nd trip around the sun. 42 has always been my number. I learned a little while ago that it’s a thing, according to Hitchhiker’s Guide to the Galaxy, it’s “Answer to the Ultimate Question of Life, the Universe, and Everything“. It’s a book or something, I don’t know, but apparently it says 42 is relavent.

For me, it’s been my favorite number for reasons I didn’t consciously realize for a long time. It was a jersey number when I played on some sports team when I was a kid, and my mom told me it was my grandfather’s high school football jersey number. My parents were born in ’42. Both of them. My birthday is 4-2, April 2.  I’ve always liked the number

So, I thought maybe this would be the year I’d find romantic love but alas, that’s not to be the case (thought I do have another 24 hours). I did however, find a different kind of love! Little Sister love! I met this awesome little person… 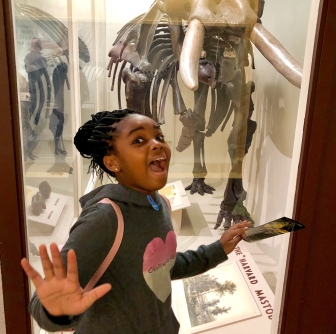 So what’s there to be bummed about? Not much at all. I sent a text to her mom last week, asking if April 13 would work for our next outing. She responded with the (in the photo) text below. 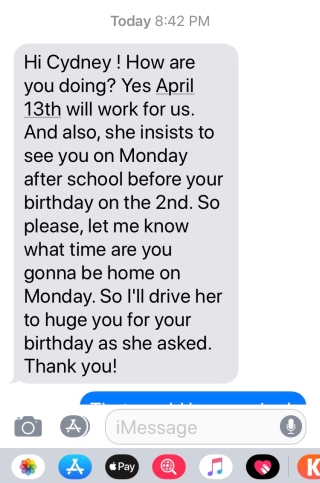 In truth, it’s not aging that I have a problem with. Aging in inevitable and I feel like the older I get the more sure I am of myself, for better or for worse. My issue is with the number. Years ago I was on a date with a jerk when I mentioned my favorite number was 42. Somehow we got onto birthdays and I mentioned other ages I didn’t care to be; 23, 17, 37, 31. To which he said “You don’t like prime numbers.”

So I guess that’s it. I don’t care for the number, though the age itself is fine enough. Poor 43. All neglected and ugly-looking. And indivisible.

It’s been a hectic couple of days. I’m working on a photo project called BU at Night, so I’ve had a wonky work schedule.

Yesterday I hosted my friends for my annual Thanks for Being My Friend Birthday Brunch and had a great time. Some texted me later saying “Your friends are such great people!” which I thought was cool – that they all enjoyed each others’ company so much. And there was monkebread and everything is perfected with monkeybread,

After they left, I tidied up a bit before hopping in the car for a 50 minute drive to a photo shoot. It turned out to be an hour and fifteen and I was mortified to be late. I was meeting with Jenn and her extended family. Jenn and I met when we were around 15 years old and attending the Wellesley College Explo summer camp. I was all heart-broken after my first “boyfriend”, who was a summer exchange student from Spain, had gone back home. Yesterday, she told her sister about how we met, and added “We used to sit huddled together listening to Sting and sobbing.”

I clearly have a terrible memory because I don’t recall this, but I am mortified at the thought of it and also am sure it’s true. That’s a real friend – someone who will cry with you when you’re being an over-dramatic teenager. That was a weird summer, I remember, dealing with my first real heartbreak and not really enjoying the camp the way I potentially could have if things were different.

Jenn lived a good distance away, but we saw each other occasionally for a few years. I remember one visit vividly. We wandered Harvard Square and thought we were the funniest people in the world while we talked to each other in a fake foreign language. I have no idea why. We also went to the movies to see KIDS which was traumatizing and awful, even now, thinking back on it.

We lost track and years later when the internet arrived, I wondered how she was, remembered her name (small miracle. See above about my poor memory) and found her online. As an adult she spent many years traveling the world and doing amazing things for women’s health, and now she continues to do so in Seattle where she lives with her husband and baby. It was so great to see her and I lament that she doesn’t live closer. It would be so nice to be friends “in person”. I kicked myself for not getting a photo with her while I was there, but she did get one of me with her gorgeous little boy. 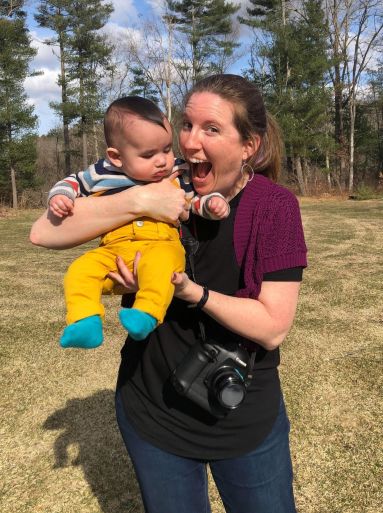 Sorry. This entry was about thoughts on a birthday and then it tangented. It happens.