WADENSWIL, SWITZERLAND• I joined my Aunt Reeli, who is also my godmother,  in the

beautiful home she shares with my Uncle Billy just outside Zurich for a perfect breakfast of yogurt, and musli with fruit and croissants. The casual feeling of the day even as it’s just getting started is a welcome change of pace after all the running around in Copenhagen.

We made our way into the city via the train and in the Hauptbahnhof (main train station) there was an interesting setup. Reeli asked around and figured out that this was an artist’s map of Switzerland turned into a giant puzzle, and today visitors could get a section of the puzzle for a donation, which would then go to a children’s charity. Such a lucky thing to stumble on! 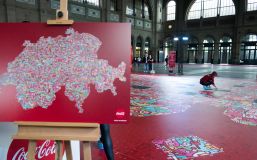 We had lunch on the water and both Anne and Thomas, who is Anne’s sister and my cousin, joined us. It was so nice to catch up with Thomas and hear about his plans to open a pasta shop in Zurich. He has many years of experience as a cook at various restaurants in the city, mostly very fancy ones, and he took an extensive course on pasta making in Bologna, Italy a few years ago. I had been crossing my fingers that I would get to try his product but alas, that will have to happen next time when the shop is set-up.

With Anne and Thomas

Reeli, Anne and Thomas take a closer look at photos of ancestors that I’ve been collecting online for some research

Thomas’ sister Anne is a designer and is currently working in murals. You can see her work HERE. She’s going to be doing the design work for Thomas’ shop, and this little idiom misunderstanding between a designer and a food guy was perfect. Some background if you don’t know, Pantone color is color-matching system universally used by many industries, including printing, graphic design, paint, etc. and companies use Pantone Colours in their logos and advertising to synchronize their brands and to ensure they are consistent across the board. You use a number to match the pantone color exactly.

Anne was talking about getting the right color match for the business cards and other materials. “I gave the color to the printer in Pantone number,” she said, implying that with this number provided, there should be no problem with getting the exact right color on the cards, etc.

“Panettone?” Thomas responded with an Italian lilt to his pronunciation of the pastry.

Maybe you had to be there, but it was pretty perfect.

Thomas also joined Reeli and me to have a look at the Chagall windows in The Fraumünster Church in the Zurich (sorry, I couldn’t take photos there). They were very pretty, but I don’t need to own one, I don’t think.

Put in a major square, these greens were a type of protest to the fact that little greenery exists in the square anymore. If you had a dying plant, you can bring it there and it will be cared for.

A restaurant Thomas used to work at 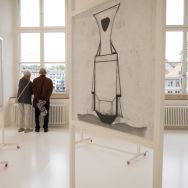 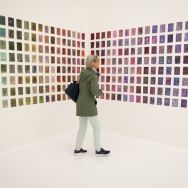 Reeli in the art exhibit

This is a model of the Grossmünster church, where the Chagals were. It’s there so that blind people can “see” it too!

My cousin George and his girlfriend Selene joined Billy, Reeli and I that evening. Over dinner (one of my favorites that Reeli makes – penne pasta in a type of creamy bechamel sauce with ham), Billy and Reeli talked about the time they had pet bunnies that got loose in the late 1970s/early ’80s. This apparently happened when my family was visiting. “You’re father and Billy in their pajamas running around in the yard after them!” Reeli recalled while laughing, adding that my dad even had a carrot in his hand.

This vision made me very happy.

Lolli, Billy and Reeli’s dog, and Lucky, who is Selene’s

The neighborhood gardening plots at sundown

Billy and Reeli’s front door (complete with Lolli peeking through