It was really hot this weekend, even in the cape. So Harlow’s lethargy all day Sunday didn’t phase me much since laying around is part of what you do on the weekend.

Monday morning after breakfast she threw-up and remained a bit “lazy”. Harlow is a puker. She always has been. She eats grass regularly and then barfs. Usually outside and not very frequently.

I have her on an over-the-counter acid reflux reducer and it seemed to help. I also came to believe it had become a weird habit of hers and not an indication of something sinister.

Maybe I was wrong.

We were back home in Medford by Monday afternoon and her behavior was fairly normal. She’s not a dog of habit; following me in this manner and laying in this part of the house all the time. She mixes it up.

I woke this morning at 4:30 and after I couldn’t fall back asleep, I got up. I was surprised to see Harlow was not her bed since I had the air conditioner going in my bedroom, but again, she’s not a dog of habit and sometimes enjoys having the first floor all to herself.

I came downstairs and found her laying on the rug near more vomit. I gave her some pats, reassured her it was ok, then invited her to go outside.

While I cleaned the rug inside, she stayed out there laying in the grass as the sky began to lighten.

I would check on her periodically over the next hour, unnerved that she didn’t voluntarily come back inside. At one point I found her on the lowest level of my property. An area where she would sniff around for woodland creatures and bark at the occasional passer by, but not a place she hung out.

She was just laying there. Not barking at people walking by with their dogs. Barely looking at them in fact.

It was not good.

I went closer and saw there was more vomit. I asked her to come to me and she wouldn’t move. I put my hand under her belly, I’m not sure why exactly, and she sort of flinched. Clearly uncomfortable.

I had already decided I would be calling the vet at this point, but now it felt more urgent. Refusing to get up. Laying in a part of the yard that has never been a favorite spot.

Why was she doing that?

I went inside and called the emergency vet. The animal hospital I took Oliver to to have him put to sleep so many years ago.

I’d rather take her to the vet she knows, but it was only 6am and I wasn’t willing to wait minutes let alone hours until they opened at 8 or 8:30.

After I brushed my teeth and dressed, called the hospital to let them know I’d be coming, I went out to get her.

At first I couldn’t find her, then I did. She was laying in the same part of the yard, but way under a bush.

Something is very wrong. I managed to get her in the car – she would get up and walk. On the ten minute drive to the vet she threw up twice, once on her own paw. She did not care.

She didn’t like it when I tried to stroke her as we waiting a million years for someone to come out and take her in. She panted heavily. Eventually she was retrieved and she went with them without much fuss.

I have always worried that because of her deep chest she is at risk of turned stomach. I wondered if heat stroke was possible.

She is only seven. Scott family dogs live to be very old. Seven is not old.

Please oh please have her come home with me. Eventually.

So I sat in the parking lot, puke on the back seat, hunger pains in my stomach and a sad, worried heart. And a lot of snot and tears.

A bit before 8am, the vet called. She is dehydrated and has a fever. I don’t know why, but I asked if they’d weighed her. I said she is normally 64 pounds. She was around 64 pounds a month ago for her annual visit.

He was concerned. She is now only 55 pounds, “we’ll weigh her again to be sure”. He was concerned she had some kind of pneumonia from aspirating vomit. The weight loss is a real issue as it’s a sign she’s had something for a while.

I left the vet’s parking lot around 8 AM, armed with the knowledge that no one can start the tests on her until about 9am. So it will be quite a while before I get some answers.  

This empty house is horrific. Her elephants just laying around.

I ask myself, I have always loved her right? It’s not just in this moment that I realize how much and that I will spend all of the money if I have to, as long as she maintains quality of life. 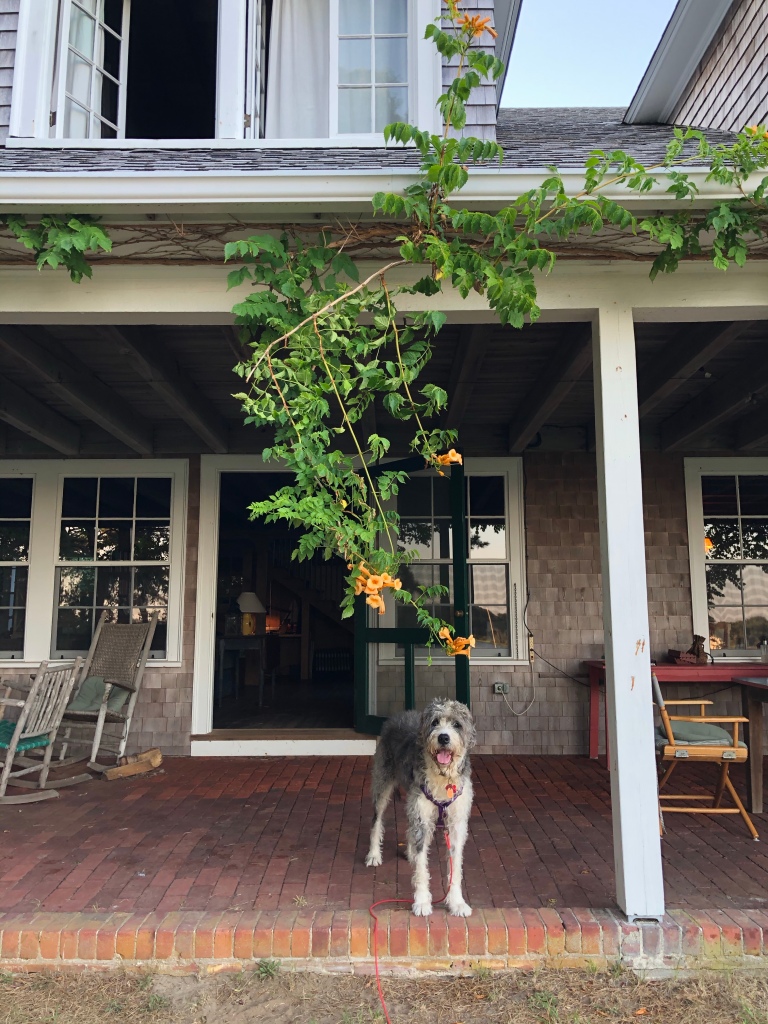 Harlow with the pretty trumpet-vines this weekend!

2 Replies to “Harlow is Sick”