The first photo was taken by Lara Solt, now a kick-ass Dallas-based photographer, when we were in a photo class together my senior year at Ohio University. She was photographing female photographers, and the idea was to collaborate with the subject and come-up with a portrait that did not include their camera. I was about one year out of my diagnosis which was on May 14, 1997, so I suggested we photograph me “shooting up”. So we did. I have had this photo on my wall along with many other great shots (which I’m thankfully not in) for many years.

As my 20 year reunion approached, so did an unusual anniversary. As of May 14, 2018, I have been a diabetic for longer than I have not. I have a thing about anniversaries, and I’m a documentarian (somehow even more so in my character than my career), so replicating Lara’s photo just sort of felt like something I should do. Mike was one of the friends in my life when I was diagnosed. Also a fellow photographer, he seemed fitting to fill my request when we saw each other in Athens over Memorial Day weekend for our reunion.

I did not enjoy having this picture replicated. It was hot, buggy and muggy out, and I was self conscious. I am heavier. I have wrinkles. but I also have technology. Technology that makes management of my condition that much easier. So, that’s why I had Mike take the picture and it’s why I’m sharing it. To show the passing of time, to show the advances in science. And to show myself that I am still here. And I am OK, just as I am. 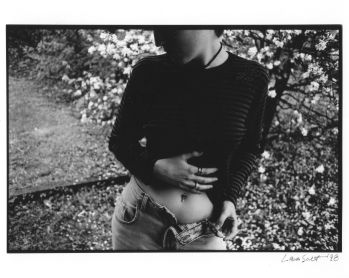